When Aurri le Borgne asked if I wanted to collaborate on an Opal scroll for Ilhuicacihuatl de Xochimilco, I lept at the chance! Ilhuicacihuatl is an incredibly giving person in both time and energy, an amazing teacher (I’ve learned so much from her classes), and a force to be reckoned with in New World studies in the SCA. In short: she’s awesome, and I wanted to be part of creating a scroll for her!

After convincing myself I couldn’t learn Nahuatl in less than a month and therefore an original language composition was out of the question (for now), I dived into research, looking for both a calligraphic hand and appropriate text. I quickly discovered Bernardino de Sahagún, a sixteenth-century friar and Nahuatl nerd who recorded both cultural and literary information regarding the Aztec people in a Western alphabet (score!). In the time I had, I couldn’t find both a literary text in translation and digitized manuscript, but I found two related pieces: The Florentine Codex, digitized by the Library of Congress and in Bernardino’s own hand, and Ballads of the Lords of New Spain: The Codex Romances de los Señores de la Nueva España, which was probably recorded by Bernardino, exists in one 17th-century manuscript, but available transcribed and translated by John Bierhorst and available for free online. Aurri had found a similar manuscript from Bernardino for the illumination, so we were good to go!

First: wordsmithing. Nahuatl poetry is new to me, and so at this point the most historically accurate I could get would be by cobbling together bits of the translated Ballads and massaging them into something that works for an SCA scroll. I read through the entirety of the Ballads (which aren’t particularly long), and I was struck by both the beauty and cultural resonance of the pieces. Despite knowing very little about the culture, I could still see the significance of multiple items and images (such as gold, jade, and flowers — flowers abounded!); I was moved by how the poetry wedded joy in beauty and sadness at its transience. Because I’m a language nerd, I still had to do a little linguistic digging, so I used the online Nahuatl Dictionary to look up Ilhuicacihuatl de Xochimilco’s name. I giggled at how perfect the name was for her and decided to work it into the scroll text.

The final text uses lines from poems I, II, IX, X, XVIII, and XXXIII in the Ballads:

Friends, let us go sing in Marinus, in Atlantia, on the second Day of Love. Eckehard and Jane have come to string jewels, to adorn with flowers. They value as gold the good service of a heavenly woman from flower fields; her heart and works are jade. Let there be broad plumes and opals: let Ilhuicacihuatl de Xochimilco be inducted into the Order of the Opal. May all know her name, may her flowers not wither. Let’s drink—let’s eat—cacao flowers: our hearts are glad with flowers this February 26, A.S. LVI.

Because I knew Ilhuicacihuatl was making chocolates for the event where this would be received, I had to include “let’s drink—let’s eat—cacao flowers” directly from Poem IX. Also, since the translation by Bierhorst rendered the poetry in a visually prosaic form, I retained that for the scroll text.

Next, the calligraphy! I was really lucky that I had an exemplar from one person, right? Right? WRONG. Y’all, Bernardino couldn’t write an “a” the same way twice in The Florentine Codex. He also couldn’t write the same size twice. Or keep his slant consistent. That said, all of this was a boon to me: I struggle with slanting scripts, and this late-period hand was entirely new to me (and learned in less than a week), so any inconsistencies in my version actually make it more accurate! Ha! An additional benefit was that his handwriting was not too different from earlier batarde scripts, which I had practiced in the past, so all-in-all it was not too difficult a task to handle. My final version was still a little rounder than the original, but I’m still pleased with how it came out.

For the ductus, I tried to use mostly letter-forms from the Nahuatl part of the manuscript; however, I had to fill it out with letters from the Spanish part, as there are multiple letters used in English and Spanish that did not appear in the Nahuatl text. Even with that, there were some letters that are fairly common in English that I couldn’t find in the manuscript (especially K and W), so I had to hypothesize my own letter forms for that based on the original.

To make sure that I got the calligraphy right on the first try, I did a test piece on Bristol using the same nib and ink (I don’t remember the nib size, but the ink was Noodler’s Eel Black). This piece was fairly successful, with only a couple errors but good spacing, so I taped over the errors and simply traced it for the final product. 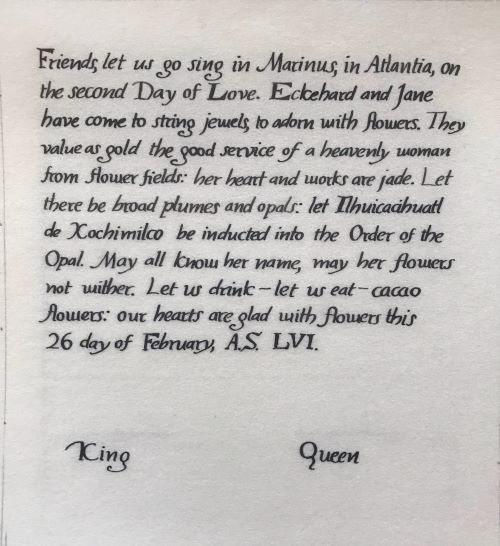 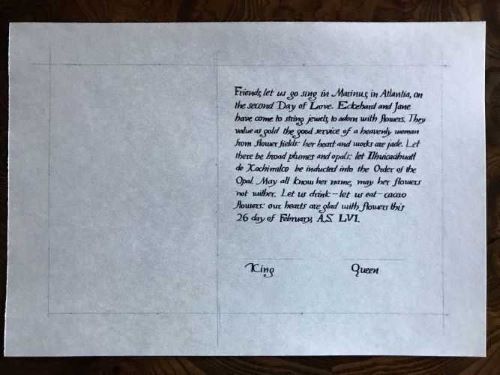 I think it came out all right!