When Korrin Valravn asked me to write the text for Lucy of Wigan’s Coral Branch (AoA-level arts award), I lept at the chance, as Lucy is a dear friend.

Korrin had already selected the exemplar (a copy of Dante’s Inferno, MS Vat. lat. 4776, fol. 13r;  Canto 4, ll. 64-87). This is a version of the Inferno with intensive planned glossing by Jacopo della Lana that had come up in conversation with Lucy when talking about glossing on legal texts. Glossing my own poem would be weird for a scroll, though, so Korrin brilliantly suggested I write a story to take the place of the glossing. To preserve the structure of the glossing and the layout of the exemplar, I decided that the story would incorporate lines of the poem.

The poem itself is hendecasyllabic meter (eleven syllables per meter) in terza rima (a rhyme scheme of ABA, BCB, CDC, etc.), which is the same structure as the Inferno. The prose interpolates lines of the poem in place of each glossed line in the original. Each section is approximately the same length as its respective gloss, which I achieved by taking a rough count of words in the exemplar and editing myself heavily. While the three animals in the poem (leopard, lion, and wolf) are pulled from the first canto of the Inferno, I twisted them towards Aesop’s Fables while also pulling heavily from forest episodes in chivalric romances. I also included an oblique reference to Dungeons and Dragons, as Lucy and I play together.

Hear, how midway in the journey of our lives,1
great merit and worth were discovered that we,
King Anton and Queen Luned, must recognize.

In Atlantia’s northern lands, fair and free,
dwells Lucy of Wigan in Roxbury Mill,
where with modesty she makes marvelously

her diverse delights with dedicated skill.
To list them all is a task most punishing
she creates with fiber and food — and more still!

Knitting and naalbinding, weaving and sewing —
sparing time for a dance, for Lucy loves balls —2
then to the garden, as greens need gathering.

Oft from her kitchen tempting fragrances call:
desirable dishes waft deliciousness,
while smooth libations sate all friends in her halls

Her subtlest arts remain; these are priceless:
We exclaim her judgment, mirth, and courtesy,
but the greatest of all her gifts is kindness.

Now induct her into that high company
of the Coral Branch! It is justly called for,3
and done by our hand and our Royal Decree,

For Lucy we laud, adulate, and adore,
in Anno Societatis Fifty-Five
on April the Tenth at Valencia Court.

Hear, how midway in the journey of our lives,
of that time when Lucy of Wigan was seized with a need to adventure, setting forth from the safety of her manor.

In Atlantia’s northern lands, fair and free,
Lucy set forth down the straight way into dark woods, until she came upon a leopard trapped in vines. Parched and near dead, it begged her to share her cordial, but Lucy knew a sip would not sustain the leopard — so she cut it free. It thanked her for her kindness, and she went onward. Soon she came to a lion weeping under a willow-tree. Once a prisoner, it had paid for its freedom with its mane. She could not bear its distress, so she sat—

Knitting and naalbinding, weaving and sewing—
with her diverse skills creating a new mane for the lion. Fastening the mane around the lion’s neck, she assured it of its handsomeness, with or without a mane. She left him gladly preening into a pond. As night grew closer, she came upon a starving wolf lying in the path. It whimpered pitifully, and Lucy was reminded of her own stomach rumbling when

Oft from her kitchen tempting fragrances call,
enticing her to taste the fine fare before it was finished. Kneeling, she offered a meat pie to the hungry wolf, who gladly took it. Soon it fell asleep, and she went onward. At last, she found herself in a grove where starlight reflected from every surface, for each leaf was of silver, bronze, and gold, and each branch of amber, diamond, and coral.

“Her subtlest arts remain; these are priceless,”
a sweet voice sang out; a luminescent figure stood in the middle of the grove. “You entered a forest, thick-crowded with troubles.4 Though you could have passed without a trace, you stopped for each creature that needed you, helping as you could.

For Lucy we laud, adulate, and adore;
A poet among poets would not have words to describe all you have done for those you have helped. You have done many works, with fiber, food, and flower.” The forest glowed gently around the figure, who plucked a twig of coral from a nearby tree. She extended it to Lucy, who knew then that the moon had come down to test and reward her. “But moreover, you were kind.”

1 Hear, how midway in the journey of our lives: This line is taken almost exactly from the first line of the Inferno, which begins (depending on the translation) with “Midway upon the journey of our life.”
2 Lucy loves balls: This is a joke that started at the first Pennsic Lucy went to, where she was very excited about the number of dances in the evening. We’ve all rather leaned into it.
3 of the Coral Branch! It is justly called for: This line and the following verse had to be changed, as to get me to attend Court for my Pearl, Korrin told me that Lucy was receiving her Coral Branch a week before she actually did. I had written the poem to include the date and the previous event, so I had to revise a few of the lines. Luckily, they were fairly straightforward to revise, and actually improved the final verse!
4 a forest, thick-crowded with troubles: This line is an adaptation from Canto 4, l. 64 of the Inferno (a line from the exemplar), which is sometimes translated as “a forest…thick-crowded with ghosts.”

Calligraphy and illumination by Korrin Valravn 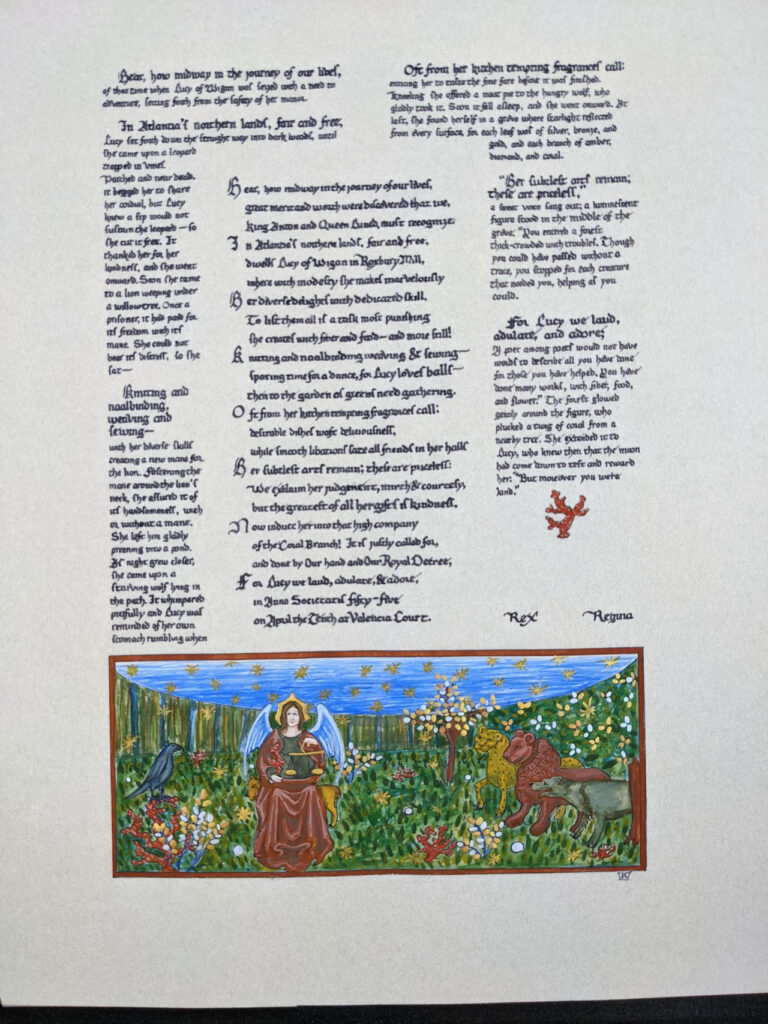 Institute for Advanced Technology in the Humanities. The World of Dante. http://www.worldofdante.org/inferno1.html