I picked up scribal in the fall of 2017, and although I was unable to attend the following Twelfth Night, I desperately wanted to enter the New Scribe Contest. Based on Her Majesty’s whims (Viking persona and a love of horses and the color red), I decided to do an Urnes-Style Horse and Grasping Beast Scroll. I was honored that my scroll was selected as the winner!

Because I wanted a challenging design (and I could not find any digitized exemplars of period illuminations that fit my concept, as Nordic manuscripts are rare before 1100), I decided to base my design on Urnes-style knotwork (c. 1050-1132). I used three artifacts as inspiration:

I decided to adapt one of the Urnes-style grasping beasts into a horse, based on Her Majesty’s whims. The color choices were also influenced by an Urnes-style scroll found online dated 2007; I could not find the name of the original artist.  I used gouache and pencil on pergamenata.

As my third scroll ever, this scroll had many firsts for me:

I painted my first scroll blank in 2017, the same year I joined the SCA. The elements were an amalgamation of elements from early 15th century manuscripts (I believe I pulled from BNF MSs. Français 117-120, which was made between 1400 and 1425, with some modifications to the illuminations in the 1460s). I then entered this scroll into the Twelfth Night scroll blank competition in 2019. 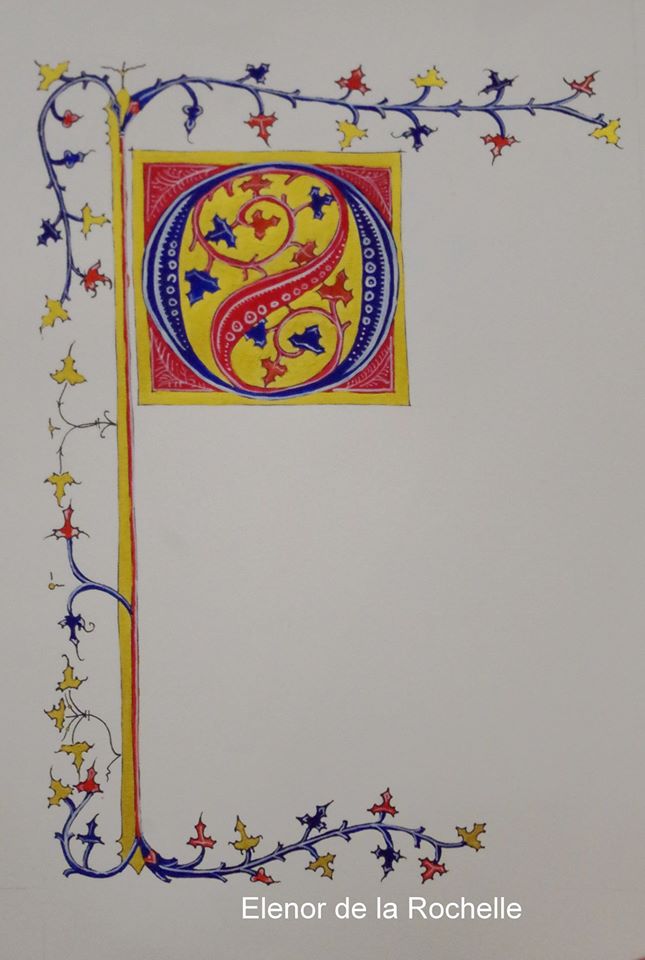 Photograph is courtesy of Tannis Baldwin, as I am awful at remembering to photograph my own items!