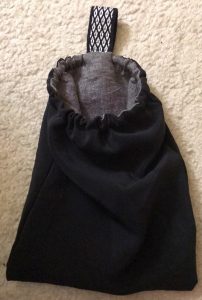 However, the piece I am most proud of was my rune-belt. Four yards tablet-woven out silk, this took me over 22 hours from start to finish. It wraps twice around my body and hangs nearly to my hem. It was my first complicated pattern and my first double-faced weaving, and I came up for the runes’ patterns myself (you can see how I refined the letters in each repeat). The runes literally say “ic spinne þone þræd wyrde,” which is Old English for “I spin the thread of fate.”