December 31, 2020 marked one year since I began the Great 2020 Dyeing Project Fade Test (which also had a small sidequest of the Madder Adventure), which meant it was time to take down the final fade swatches and process them! For the dyegoods, dyestuffs, dyeing combinations, fiber preparation, and dyeing methods that were involved in preparing for this year-long fade test, please see Part 1.

The final dates for the fade tests shifted only slightly from my original plan:

My test of the canary-stained wool (using yarn spun from the yellow tips versus yarn spun from the white roots) lasted three months. I also kept a control swatch of each color and material in a dark place. All the swatches were faded in a south-east facing window for their duration.

Photographing color is hard. While I did my best to control the lighting for the swatches and developed a replicable way to photograph (white background, pitch black room, and ring light!), colors change in different lighting, and there is no good way to replicate that in photographs. However, film can capture some of that, so I have created a video so that you can see the full dye book live. This video was filmed on a rainy day with one incandescent light off to the right of the video, not overhead. You can view the embed below or watch it on YouTube here. 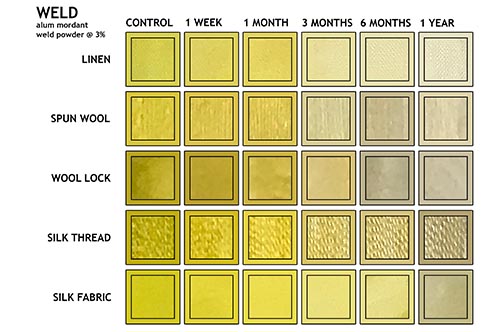 The initial color achieved different depths on the different materials, with just a hint of green undertone. However, this green undertone faded within a week, so if that is something people dislike about weld, they can intentionally eliminate it with one week of sun exposure. It seemed like weld faded quite significantly, but when compared with the original materials (see materials below), there is still a cream tint. 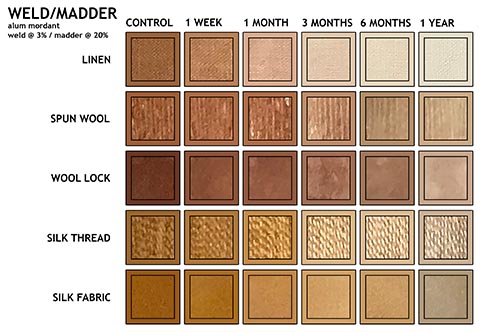 Wow did this one fade on linen! When compared with the madder below and weld above, it’s surprising that this combination lasted longer on the other materials. However, the multiple layers of dye may have protected each other while also fading at similar rates, with richer tones achieved. This combination also grew on me as it faded. 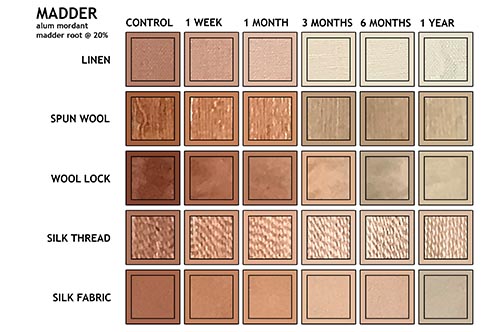 So… 20% madder does not last. In person, it’s the barest buffs/blush pinks on both wools and silk fabric at the end, and it’s nearly completely gone on linen by six months. Anything that I do with madder that I want to last will either need a greater concentration of dye or will need to only have limited sunlight. 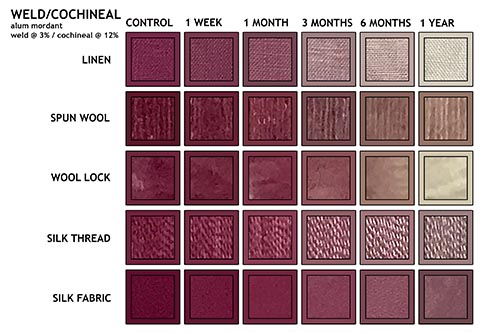 In my first post, I noted that the concentration of cochineal completely overpowered the weld. However, like the weld/madder combination, this combination gave the dye greater staying power. That said, I found it quite odd that the cochineal nearly fully disappeared from the wool lock but remained with decent saturation on the spun wool. Perhaps the compressed nature of the yarn (with cochineal saturating it) protected the dye more from the sun, where the spread-out nature of the wool lock did not. On the bright side, this combination lasted well on most materials! 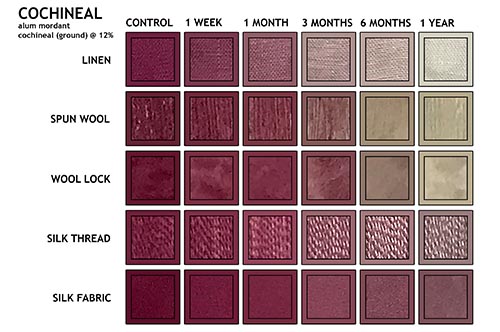 Without weld, cochineal faded much faster, almost fully disappearing from both the spun wool and the wool lock. However, the cochineal on linen and both silks faded at about the same rate. 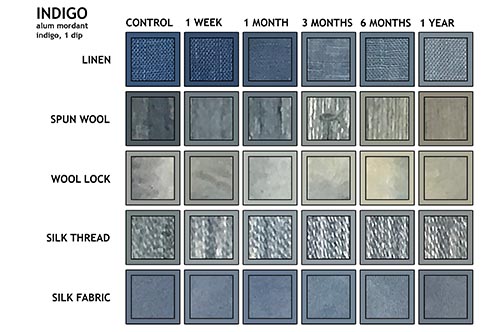 Indigo lasted well on all the bases, but particularly well on the silk and linen; there was almost no change on the silk fabric, and the change on the linen was visible but not significant. I was surprised that indigo faded more on both wools, so I’d be interested to see how greatly it would fade if I dipped any of these materials more than once in the indigo. This dye would be an easy one to use regularly and top-up as needed as fading happens. 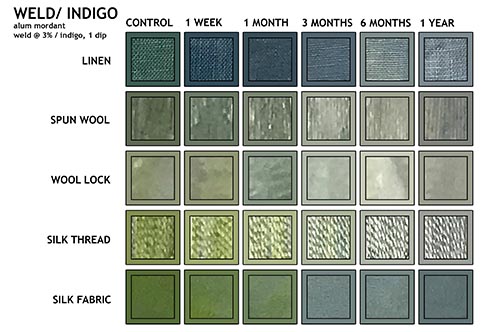 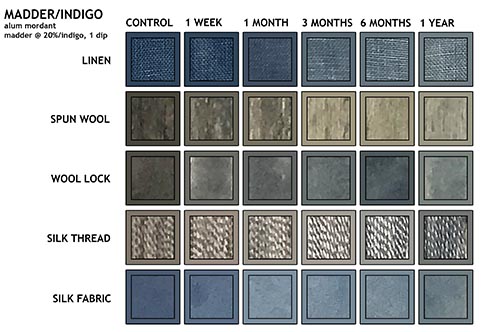 I’m still intrigued by how weirdly mushroom-colored this combination ended up on both wools and the silk thread, while the indigo completely overpowered the madder on the silk fabric and linen. That said, this combination had a much more gradual fade than some of the other dyes. 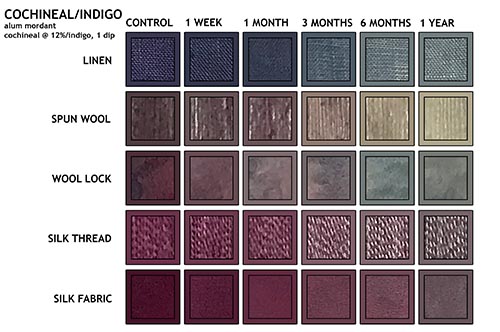 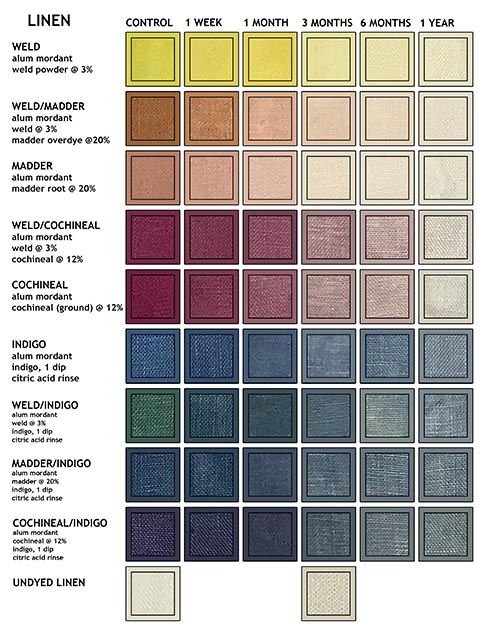 Unsurprisingly, because many of  my methods weren’t well-suited to plant fibers, the dyes did not last well on linen. Indigo lasted pretty well, but pretty much every other color is gone by one year. There is also a distinct fading jump between one and three months, but less so between three months and six months. 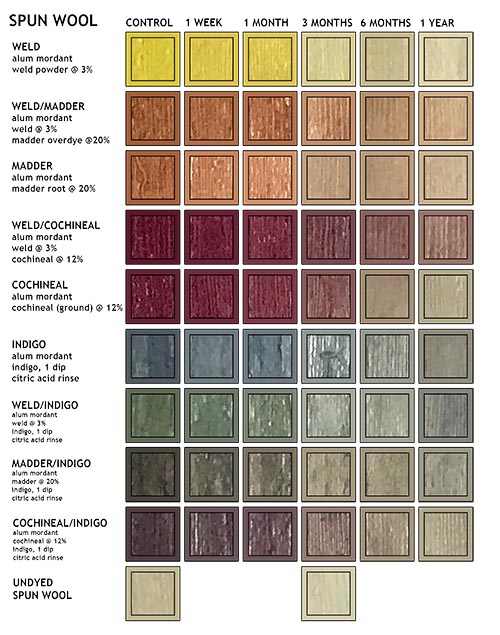 On the spun wool, the weld/cochineal and weld/madder combinations lasted the best. There is also a distinct change between one month and three months on this material, but less so with three months to six months. 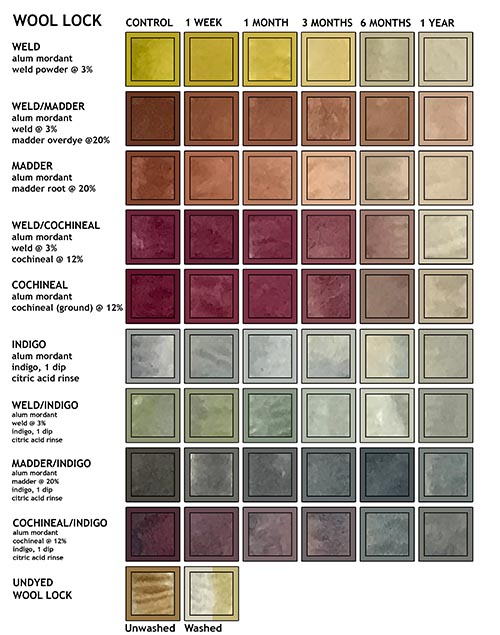 Unsurprisingly, the wool lock faded similarly to the spun wool. When reviewing these locks, it’s important to member that the full locks have canary stains (yellowing at the tips). This stain can be seen in the swatch of the undyed, washed lock, which I sized so that the difference between the white and yellow part of the lock was visible. 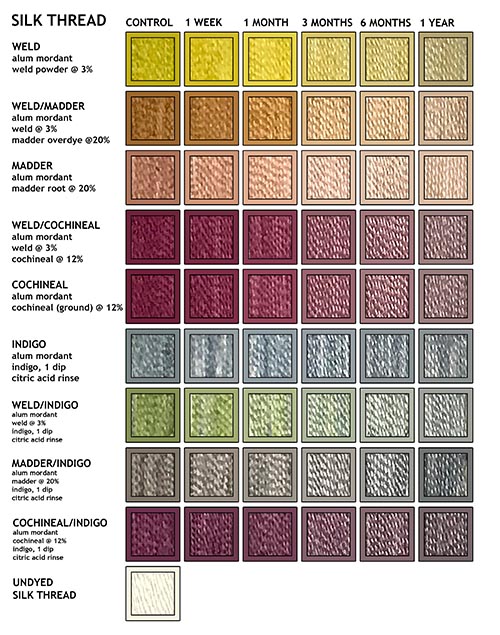 Yup, this is why silk was so valuable throughout history. It’s not just that the fabric feels luxurious — dye lasts. While there is fading after a year, it is far more saturated than any of the other materials. (Nota bene: the one-year weld swatch may not be perfectly accurate due to some photography issues).  That said, if I used natural dyes for weaving trim, I’d plan to sew it on in a way that I can rip it off when it fades too much and flip it over. 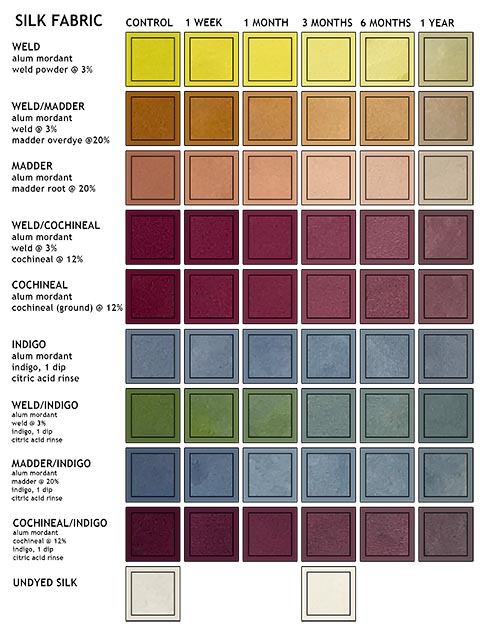 Excepting madder and weld, the dyes were definitely the most long-lasting on the silk fabric! I would happily dye a piece of silk clothing in any of these colors, knowing I could redye it after a few years of irregular usage. 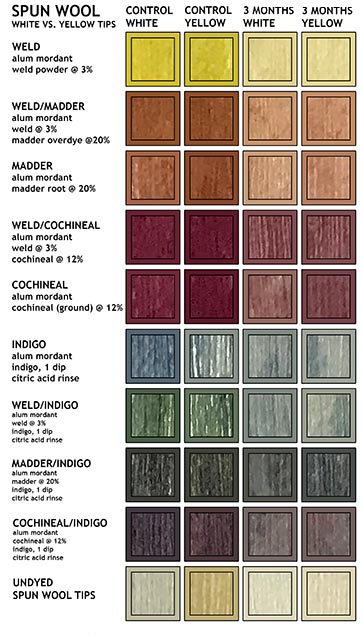 Finally, we come to the canary-stained test! This whole year-long project launched from wanting to see if dye would stick to the canary stains for a significant time, so this must be included. Surprise: it does! After three months, there’s no siginificant difference in fading between the yellow tips and the white roots. In fact, the dye lasts a little bit better on the yellow tips, even th0ugh it may take the initial dye less well. Even better, the undyed swatches indicate that the yellow bleaches out of the tips pretty well after three months!

Overall, I am unsurprised about how the different materials took dye and how that dye lasted (or didn’t), as it aligns with everytyhing I had read.  However, I was surprised to see that the dye seems to fade faster on the wool locks than the spun wool. I was also (happily!) surprised to see that the dye lasted so well on the canary-stained wool, and that it bleached well when undyed, too!

Overall, anything that I dye with natural dyes will need to be protected from the sun, used rarely, or able to be redyed on the regular. Silk will be better for embroidery and tablet or inkle weaving on garments, as it will last longer; any embroidery or weaving I want to do with wool will need greater protection. However, woven trim can always be cut off and flipped over, and even if I wear or display those items every weekend for a full year, it will still take three years for it to reach the same fade level of this fade test.

Want to recreate these colors in digital art? The borders around each swatch are an averaged color of each swatch! Download a PDF of all the dye swatches here or appropriate image and use a color-picker to choose the color in your preferred mode, and let me know what you do with it!