When I found out that Iselda de Narbonne was going to receive her Laurel, I may have demanded to make her mantle. I don’t know. It’s all a little fuzzy.

Due to life, the timeline on construction got a little tight, so the foundation seams were all machine sewn. However, every single visible stitch was hand-sewn, and the applique and beads were done entirely by hand. The fabric and thread is 100% silk. Every fabric used is a two-tone that shimmers when in motion, some more subtly than others. The pearls are glass Swarovski pearls.

I was asked to say something about the mantle as it was presented to her, but initially all I could think of was “A badass bard deserves a badass mantle, and I hope this makes you cry.” However, inspiration struck two nights beforehand, so I wrote her a poem that I read:

The last two lines, in Old English, translate directly to “While I sewed through the night, I stabbed myself often. At the spectacle of the wonder-mantle, I hope for your tears.” In other words, “I hope it makes you cry.”

I was honored to collaborate with Lady Clara Brauer and Lady Kaaren Valravn on Thea de Nes (“Aunt Nessie”)’s Pearl scroll. Clara did the majority of the illumination and all of the calligraphy, Kaaren painted the portrait and the cherubs, and I wrote the text. You can find more pictures on Kaaren’s site.

Endless delight is found in pearls: precious prizes, their gentle beauty is formed through great toil. Know that We, Cuan and Signy, King and Queen of Atlantia, have found such a pearl in Thea de Nes. Crafting wonders from fiber, pen, paint, and bead, she shares them freely; her generosity warms Our hearts and soothes Our spirits. Thus do We induct Thea de Nes into Our Order of the Pearl. Done this 8th day of February, A.S. LIV, at Bright Hills Baronial Birthday in the Barony of Bright Hills. 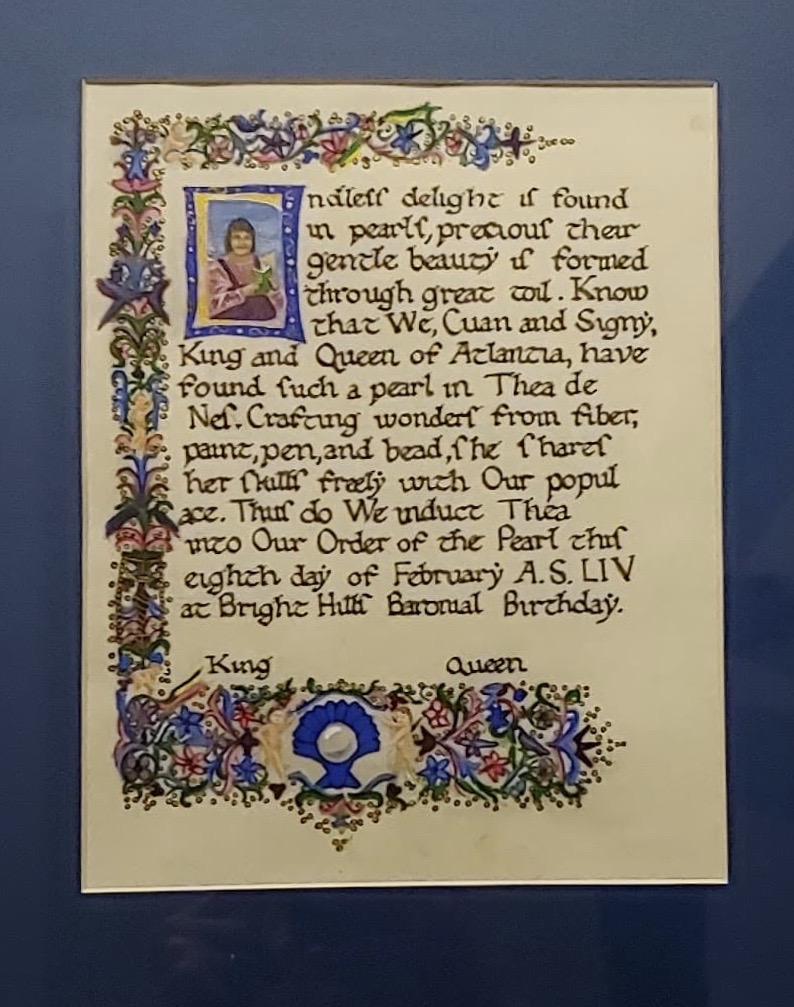 In addition to sewing Mistress Ysabeau’s Laurel cloak, I spun the wool for her vigil shawl. Ysabeau has made several vigil shawls for other people, so my friend Lucy (Lucy of Wigan) and I decided that we must make Ysabeau her own. Unfortunately, I don’t have any pictures of the yarn-in-progress. The wool was off-white merino from Paradise Fibers, and it was an utter delight to spin. Once the yarn was spun up and washed, I threw together a simple triangular shawl pattern, did a tab cast-on, and passed it off to Lucy to knit. Once she was done with her beautiful knitting, we blocked it together.

When Baron Hamish MacLeod found out that his wife, Baroness Ysabeau ferch Gwalchaved, was going to be surprised with her Laurel at Bright Hills Baronial Birthday in February 2020, he asked me to create her Laurel cloak. Now-Mistress Ysabeau is a spinner, weaver, and sewer who handsewed garb for one of her first events 32 years ago (in a time and place when handsewn garb was actually looked down on — how far we have come!) so I knew I had to pull out all the stops I had.

END_OF_DOCUMENT_TOKEN_TO_BE_REPLACED 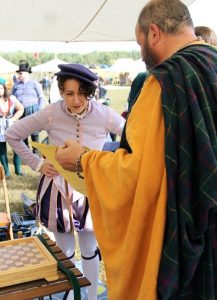